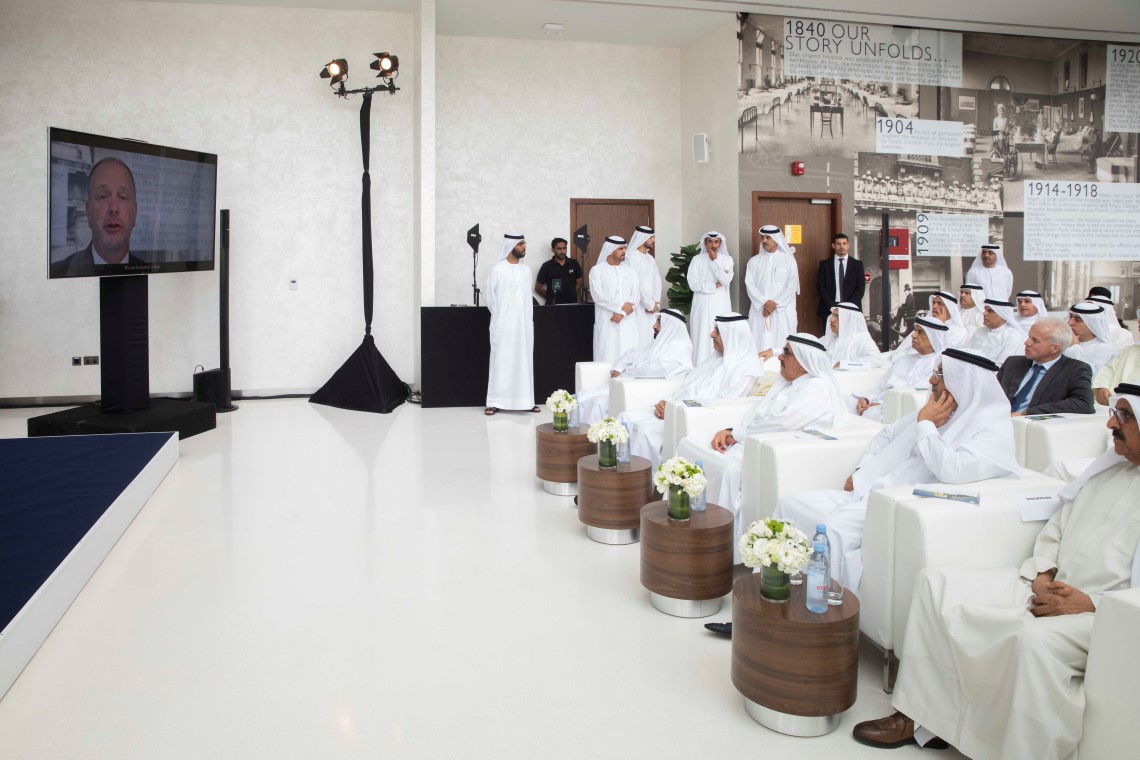 His Highness Sheikh Hamdan Bin Rashid Al Maktoum, Deputy Ruler of Dubai, Minister of Finance and President of the Dubai Health Authority, today presided over the official opening of King's College Hospital London Dubai Hills. The ceremony was also attended by a number of other dignitaries including H.M. General Counsel from the British Embassy in Dubai. After the ceremony, attendees were given a guided tour of the state-of-the-art hospital.

The flagship 100-bed Dubai Hills hospital is the fourth King's facility in the UAE; the other three being Medical Centres based in Jumeirah and Dubai Marina, in addition to a Medical and Surgical Centre in Abu Dhabi. All King's facilities in the UAE enjoy a direct link to King's College Hospital in London, a world-class teaching hospital, with 175 years of history at the cutting edge of medicine.

During the ceremony Christian Schuhmacher, CEO of King's in the UAE, also unveiled the King's College Hospital London's Manifesto of Care, a pledge which encapsulates the brand's essence and outlines King's commitment to the UAE. The manifesto, signed by all King's medical staff, makes five promises: to provide patients with the best of British healthcare; to never over-prescribe or carry out unnecessary tests; to safeguard King's medical legacy, giving patients in the UAE access to the hospital's network of world-class experts; to treat patients with respect and dignity; and to always ensure patients' safety, comfort and peace of mind are the hospital's priority.

Commenting on the Manifesto of Care, Schuhmacher said: "The official opening of our state-of-the-art hospital and the unveiling of the King's Manifesto of Care is further proof of our unique approach to healthcare in the UAE. Everything King's College Hospital's Doctors do is driven by best practice care pathways and the desire to put the health outcomes of patients before anything else. We are committed to using evidence-based care and our links to King's College Hospital in London to give our patients a world-class healthcare experience."

King's College Hospital London new flagship facility is located at the heart of Dubai Hills and has already welcomed patients and begun surgical operations, including general surgery and paediatric orthopaedic cases. The hospital acts as the central direct conduit to King's College Hospital in London, one of the largest teaching hospitals in the UK.

King's in the UAE provides the same high-quality trusted healthcare, modern techniques and evidence-based medical care as in the world-renowned hospital in the UK, enabling patients to enjoy advanced medical care without leaving the country. The London and Dubai hospitals also share knowledge from established King's research centres in the UK. What's more, over 45% of Physicians and all the senior nursing staff (comprising 30% of the total nursing staff in the hospital) at King's in the UAE are UK trained.

King's College Hospital Dubai Hills brings the King's UAE footprint to a total of four facilities in the UAE. Each facility is fully integrated, 365 days a year, with King's in London. King's plans to further grow its UAE footprint by adding 100 beds to the Dubai Hills hospital as part of a phase two expansion.

Innovation and smart technologies feature heavily throughout all facilities, enhancing King's operations and patient experiences. These include: the 'GetWell Network' an innovative edutainment system, unique to King's, that offers patients not only entertainment, but up-to-date, interactive information and education about their condition; The EOS Imaging System, an advanced orthopaedic imaging technology that gives doctors a clear 3D view of the patient's musculoskeletal system and the first-of-its-kind in the UAE; and the Pharmacy-led Omnicell® End-to-end automated medication management process that ensures medication management is optimised to a safe, fully traceable, paperless system at the point of care.

King's in the UAE specialises in five core sectors - Paediatrics, Cardiology, Orthopaedics, Obstetrics and Gynaecology, and Metabolic Diseases, as well as offering integrated pathways with King's in London in Chronic Liver disease, Fetal Medicine, Haematology as well as several other areas.